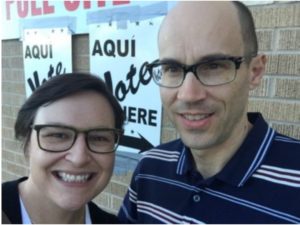 In 2007, I spent a year working at The Apollo Theater in Harlem, NY. One day on my way into the office, I slipped on an icy sidewalk on 125th Street, and in a comic prat fall, landed on my bottom in a filthy puddle. A group of guys gathered outside the corner grocery busted up laughing, “Damn, did you see that White girl?”

In the moment, I was embarrassed, self-conscious, and humbled. I wanted to hide and to be anywhere else. I think I just ignored the guys, picked myself up, and walked on. At the time, I remember feeling especially vulnerable when my race was called out, recognizing that being White was something I rarely thought about (in my entitled, privilege way).

In so many ways, that year working in Harlem taught me so much. A decade later, I continue to build on what I was only beginning to figure out as I found myself in the racial minority for the first time in my life. I began to see how the “colorblindness” rhetoric of my suburban upbringing masked lived experiences and disguised hard truths. I began to see the complex ways that structural segregation, microaggressions, exclusion, implicit bias, class, power, and overt discrimination had played out in my own life and the lives of others. And once I saw it, I could never unsee it.