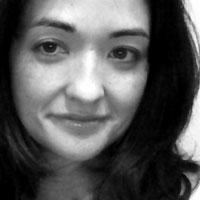 Marie K. Shanahan,
Submitted via Twitter: ‏@mariekshan.
When you’re not quite minority enough.

In 1997 at age 25, I came to terms with my place and my (mixed) race in America. I wrote a personal essay about it for The Hartford Courant: “Mixed Races, Mixed Messages: What Happens When You’re Asked To Choose Between Two Cultures”

My older brother sometimes likes to refer to the children in our family as “bananas.” Not because we’re crazy. He says it to poke fun of our heritage.

Our mom is from the Philippines; dad is a native Vermonter. So like a banana, he says we’re yellow on the outside and white on the inside.

My whole life I’ve been asked the same question by curious people who see my straight black hair and seemingly Asian eyes and then are puzzled by my Irish last name.

Sure, there are words to describe me and the many other children who are products of interracial marriages: mestizos, mulattos, hybrids, half-breeds — oh, and my personal favorite, mutts.

As we racially mixed children move into adulthood, we’re faced with the unique difficulty of trying to succeed in a country that categorizes human beings like paint swatches.

But what happens when you’re not a TRUE color? When you’re not black or white or yellow or red but some strange shade in between?

For example, on surveys with an ethnicity question, which box do we check? Other? Where are we counted? Who are we supposed to be?

These questions never became more real to me than three years ago during an interview for a minority job-training program.

An eager, anxious 21-year-old, I was up against 28 other “minority” applicants competing for just a few job spots.

My interview seemed to be going smoothly until one interviewer asked:

“From what I gather from you, Marie, you seem to lean more toward being Filipino than you do toward your other culture. Why is that?”

The question floored me. What did that have to do with my talent as a writer or my intelligence or my ability to be a good journalist?

I never thought I leaned toward either side of my heritage. I didn’t know how to respond, but I was nervous. So I just answered the question as asked, by telling the interviewer about my mother.

My mother first came to this country in 1968 to attend a training program for medical technologists. She was 22 and didn’t know a soul, but she left her poor homeland in search of something better. She met her future husband – the man who would become my father – on the plane on the way over. He was coming back from the Vietnam War.

I told the interviewer that it was my mother who taught me about pride and the importance of hard work, education and family. For years, she worked, saved and fought to bring the rest of her family to America. She showed me by example how to never lose faith in my abilities or my constancy of heart.

By this point in the interview, I had become extremely upset. I felt as if the interviewer had forced me to make a choice between my mother and father to prove I was enough of a minority to qualify for the job.

It was as if I had to divorce myself from the blue-collar, big-hearted and, yes, white man who put a roof over my head, put me through college and worried about me so much, it gave him ulcers.

I began to think this interviewer wanted me to admit I lean more toward being Filipino because that would make me a minority, and such a distinction would entitle me to all kinds of perks not ordinarily available to white people.

Why didn’t he just ask, “How dare you apply for a minority program when you are not a TRUE minority – when you can just make yourself one when it suits you?”

Well, you know what I would say to that interviewer today?

I’ve never asked for preferential treatment because of my two cultures. I’ve never received any, either.

I’ve never gotten angry about the fact that there isn’t a space on a survey marked specifically for me. I was taught to make do with what there is.

I always thought – naive as it may be – that it would be my talent, intelligence and sparkling personality to get me ahead, not my straight black hair or the paler shade of yellow that colors my skin.

As a matter of fact, I never took advantage of the circumstance that I could be counted as a minority until I applied for that job three years ago. I even felt guilty that many of my fellow journalism students at the University of Connecticut did not have the same opportunity. But in no way was I trying to maliciously beat some other “pure-blooded” minority from the opportunity.

Being half-and-half is what I am. Nothing is going to change that.

I don’t believe any of us half-zies (or anyone else, for that matter) should consider our ethnic variety a hindrance. It should be viewed as an advantage.

Our life experience is rich with the knowledge of two different cultures, making us more insightful and open-minded.

In the end, I didn’t get that job. I never found out why. One of my interviewers mentioned that I already had too much experience for a training program. But I cannot help myself from wondering if it was something else.

Maybe I am bananas.