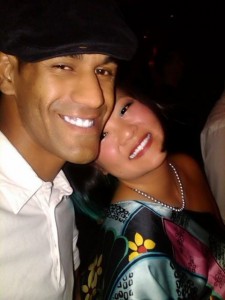 I feel a little sheltered living in Hawaii. I’m 100% Chinese and my significant other, Angel, is Afro- Latino. No one looks twice at us on the islands. Mixed race couples and children are everywhere. Plus, we pass as locals because of our looks. But we met in San Francisco and my parents are in San Francisco. Although they have had friends of many races, their daughter is with someone who is black, which is different. Yes, he’s Venezuelan and Puerto Rican but his skin is dark. Some people don’t think we are a couple and others think it’s cool in the sense that I am a Chinese woman NOT dating a white man (which seems to bring out a whole other set of racial issues/ stereotypes). We have been together for almost 5 years, we want to get married and have children in the future. At first, my mother had excuses about why she doesn’t like him, “he’s too young for you. He doesn’t have his bachelor’s.” Now that he’s in university and on the Dean’s List, she finally fessed up and said, “He’s too dark for my friends to meet.” Angel and I laughed but it’s true. The little, old Chinese women at my mom’s church will pass out at the sight of me with a tall, dark man. I really wonder how my mom will deal with brown skinned grand children? No of us are getting younger. I think she will throw out all her apprehension once a baby is introduced into the family and just baby the baby like any dotting grandmother. Then I have a good memory: I remembered the last time I was in San Francisco in the BART station. A Chinese grandmother was holding the hand of her Afro-Chinese grandson and speaking to him in Chinese. It gave me hope for my mom.